The photo below became a favorite of mine the moment I saw it. It's an old photo, probably from the 70's, so it's been around a good long time, and has undoubtedly surfaced on a number of other blogs and sites out there. It originally appeared in a magazine called Sting. Sting was half the size of a normal magazine, and was dedicated to spanking stories, articles, letters and pictures, such as this one: 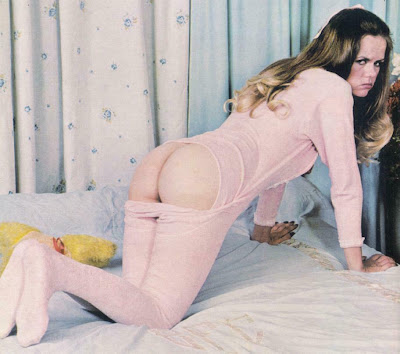 I like the hands-and-knees pose. The drop-seat jammies are adorable, as is her bared bottom. It's a pity this photo was taken before and not after a spanking--a blush of pink or red across her derriere would have elevated the photo to another level. But what really makes this photo stand out and makes it a favorite of mine is the lady's facial expression.

I love the attitude she seems to be giving off. She has a cute little pout playing across her face, which is always fun to see. Clearly she knows what is about to happen next--her overall look tells me that this isn't the first time it's happened, either.. There seems to be a mix of emotions playing on her face--anger mixed with helplessness. Is there such a thing as defiant resignation? Someone is about to get her attitude adjusted, and she clearly is none too happy about it.

That might have been the end of this blog entry, except that while searching for a picture for a different post through one of the three different stores of photos I have archived, I came across this--one I'd completely forgotten about: 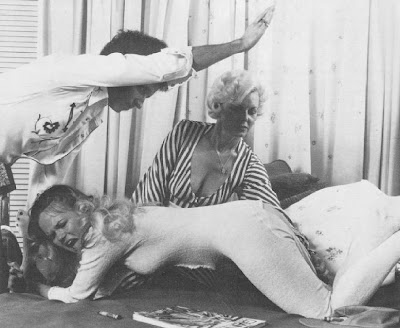 It's clearly a companion to the first photo and shows, indeed, what happens next. Once again, the spankee's facial expression is perfect--that's exactly the sort of reaction you would expect to see. I'm not crazy about the positioning of the other two people in the photo--that's hardly an ideal place for a spanker to be standing, and what is the other lady doing there? Is she adding in her own swats? Or is she just doing her best to keep the naughty girl in place? It's not the greatest spanking photo in the world, but the fact that it is tied in with the first one does give it some redeeming value.

Now, for me, the question is this--Are there any more photos to this series out there? I don't recall ever seeing them, and I've exhausted the storage on my hard drive looking for more but with no luck. So I'm throwing the floor open to you, the readers--does anyone know of other photos in this set?
Posted by Dr. Ken at 2:20 AM

These are wonderful pictures! I hadn't seen them before. When I first typed 'spanking' into my computer I was really just looking for good spanking pictures. There are some great pictures out here but the one that showed the women's facial expression were the ones that intrigued me. I wanted to know the emotions the woman was feeling and I needed to see the face! I like your phrase - defiant resignation - that is a good look. The only ones I don't like are the ones where the spankee has such a fake pleasant look on her face - you know no real spanking is going on in any way.

Thanks for taking the time to look and for posting them.

You're right... have seen the picture on other blogs. First time we learned where it actually came from though. Very cool to now know!

PK--Welcome to the blog, and thanks for leaving a comment!
For me, the worst photos are the ones where the spankee's face is in neutral--in other words, no expression whatsoever. If someone is being spanked, their face is seldom blank!
A bland look says to me, "I'm bored. Is the photo shoot over yet? Can I get my money now and go?" Most assuredly NOT the message the photographer wanted to be conveyed!

Todd and Suzy--LOL. I love that the first two comments to this post were "hadn't seen these before" and then your "yeah, seen it." Even old photos are new to some people!
Both photo file names begin with "st", and that usually means they came from an issue of "Sting"--so I hope I got that right! I got them from a photo newsgroup years ago...I'd still like to know if there are more to the series and where to find them!

Hi Dr Ken:
Very interesting photos.
I hope you do find more in the series. I am willing to bet there are many more photos in that series. I find it interesting that one of the picture is in color and one is in black and white. The second one is very interesting in the postitions of the Spanker and the watcher. Are his pants open? That may be the reason for his postion :) And are those crayons and a coloring book on the bed?
A fascinating set of pictures. I hope you find more of them.
Take care
AG

That is one of the best spanking pics I have ever seen.

I'd love to use it as an example when I try to teach people how to tell a story with their photos, but something tells me I had better not, lol.

Thanks for posting this!

Andrades Girl--that was actually quite common with spanking magazines. The majority of pictures would be black and white, and then one or two of the better pictures in the series would be in color.

Dante D'Amore--LOL. Yeah, probably not. Spanking is a good teaching tool, but using this photo for that? Not so much....

I love the jammies!!! I need to find me some!
Radha

Radha--go to
http://www.bobbiesdrop-seats.com
and look around. Bobbie Tawse is no stranger to the spanking scene, so you might find something there that you like!