Someone's Blogiversary Is Coming Up.....

Someone is going to be celebrating her 2nd blogiversary very soon. I'll give you a hint: she's part of a great website, her blog is one of the best and most popular around, and she's very, very fond of what she's holding in her hand in this picture-- 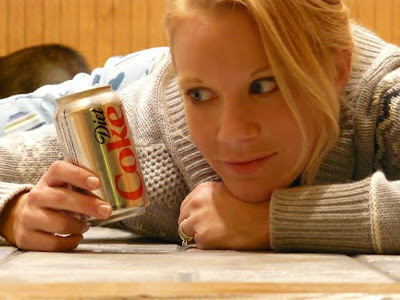 To celebrate last year, Pixie agreed to a blogiversary spanking--one swat for every comment that she got on the post announcing the upcoming event. She filmed it and then posted it. She wound up getting 120 replies--therefore, 120 swats delivered via hand and hairbrush. One problem with that--a number of her readers sort of, uh, stuffed the ballot box, as it were. Some left multiple replies, some people posted three replies to say, "Happy Anniversary, Pixie"--one word per post! I think Pixie's sit-upon felt put upon.


This year, she's doing it again. Pixie has a post up now, and for every reply she gets from now through February 7th, she'll take a swat from her husband. She'll film the spanking at home, and then post it on her blog. One big difference this year--she's only accepting one swat per person this year, rather than per comment. In other words, I can put up 16 replies to her post if I want, but it will only count as 1 swat to her total. The lady learns fast, doesn't she?


If you're feeling compassionate, you can elect to simply wish her a "happy anniversary" and tell her to skip the spank. Just be sure to state in your reply that you don't wish to add another swat to the soiree.


You have through February 7th to make your vote count. Go to Pixie's blog and wish her a happy anniversary, and let her know if your vote is "to spank....or not to spank".

Thanks for that important public service announcement. We all need to make sure Pixie doesn't get short-changed on a blogiversary spanking.

Do comments on this blog count toward the total?

Hermione--It's true, we all want to make sure that Pixie gets exactly what she's got coming to her.
No, votes on my blog do NOT count. You have to got to Pixie's blog and leave a comment and your vote there.

Went over and left a comment, and of course, mentioned that you had sent me!

I think my bottom is going to be in just as much trouble as it was last year even with the one spank per reader limit! But it's all in good fun and so I thank you for helping to spread the word. :) I'll add in an extra thanks-spank for the good doctor.

Radha--Since when do you do what I tell you to? I suddenly have a great feeling of power.... :-)
Thanks for mentioning my name! And yes, she's almost matched last year's total number of replies. Of course, some of those are duplicate comments that will get subtracted from the total, and some just wish her well and specify that "no swat" be given. So, at the moment, it may not be as bad as it looks....

Pixie--I think you may be right. At least it's less than the 400 whacks you took for "Cause for Paws"!
And I humbly agree to your offer of a "thanks-spank". Tell hubby to make it a good one! :-)