My Top Ten List of Spankable Celebs will resume shortly--shortly after Christmas Eve or Christmas Day, in all likelihood. I have a couple of posts I want to get out of the way first. And the first one is the opening of the movie remake, True Grit.

The Minneapolis paper gave it a glowing review, raving about the cinematography and the script, the sure hands of the Cohen brothers at the helm, and the "dazzling" performances by Jeff Bridges in the John Wayne/Rooster Cogburn role along with newcomer Hailee Steinfeld as Mattie Ross, the role first portrayed by Kim Darby. By the accounts I've been reading, young Hailee steals many a scene from her veteran co-stars.

I wrote a little bit about the movie when I first heard they were doing a remake. My first thought, as it is with all remakes, was, "Why?" The second thought, of course, is what would be in the new movie, and what would change. This being a spanking blog, I naturally couldn't help but wonder if the spanking scene would be in the new movie, or left out of the new script. I'm happy to report to all of you that, yes, according to my sources, the spanking scene is in the movie.

(I don't actually have "sources", but it sure sounds impressive, doesn't it?)

In the original movie, Glen Campbell surprised Kim Darby, pulling her from her horse and holding her down on the ground as he broke off a switch from a nearby bush. He then proceeded to belabor her behind until John Wayne stepped in and stopped him, saying that he was "enjoying it too much." I don't have many details on the new scene--obviously, I haven't seen the movie yet--but my understanding is that the spanking this time is a bit more along the lines of traditional OTK discipline with Matt Damon doing the wallopping. (Any ladies with Matt Damon fantasies should line up for the movie as soon as possible.....)

I understand that Hailee wore a protective pad under her skirt during the filming of that scene, so Matt could have spanked through as many retakes as necessary to get the scene right without jeopardizing Hailee's ability to sit down.

So, with at least newspaper's glowing review, and knowing there's a spanking scene in a mainstream movie to enjoy, you just might head out to the theater this holiday weekend.

By the way, check out the movie poster below, especially the advertising tag line across the top. I just might have to crop that and put it across the top of my blog! :-) 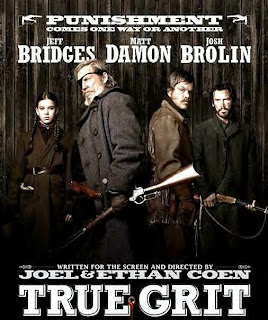 I was always a big John Wayne fan. I'll be sure to check this one out.

Oh, yes, that would make a wonderful header for your blog.

I think I'll add the movie to my wish list at the DVD online rental place I use.

Knowing your "source" the way I do, I would venture to say that he's 100% reliable.

Any word on whether the spanking is good or not? You know, not all of them are. Some guys just don't know how to spank a girl's bottom (not like you, Ken :).

Dr.Ken, The spanking movie, that I found so far to be the best, is called "Roots of Heaven". In Africa, a big-game huntress by the name of Madame Orsini, for pleasueable purposes of sport, likes to shoot down elephants. This does not sit to well with a conservationist by the name of Morel. So one evening he invades the home of this haughty, naughty lady, and desides to teach her a lesson. by commanding one of his followers, to raise the dress. pull down her bloomers, and spank her good and proper on her bare bottom, humiliating her, in front of her so-called friends. For me watching this scene was a most erotic experience.

As a birthday gift, a spanko friend took me to see "True Grit" yesterday (after first spending an hour or so tenderizing my bottom so I could sit through the movie in discomfort LOL). Having been a huge fan of the original, and not the biggest Matt Damon fan around, I have to grudgingly say that I like the new version better. The spanking scene was worth the price of admission alone. One of the few times Hollywood has gotten a remake right. BTW, one of the executive producers of the film was Steven Speilburg.

Cheryl--if anyone would know when they get a spanking right, it's you! LOL

I have to say that, for an abbreviated scene, it was very well done.

I'm looking forward to a non-abbreviated scene with you at CM this summer.