Why in the world do I live in Minnesota?

Let me tell you what's going on, just in case you don't make a habit of watching The Weather Channel. Close to midnight on Friday it started snowing here, and I'm not sure that it's stopped yet. We had close to a foot of snow on the ground by Saturday afternoon, and the weatherman was saying we could get another 6 inches before it's all over. I can still hear the wind howling outside my window, causing the snow to drift to ridiculous heights. I spent an hour and a half moving my car from in front of my apartment building--the drifts had almost entirely buried the front of the car--into my garage stall. I should have parked in the garage in the first place on Friday night, but I didn't think the snow would get this bad. Needless to say, any and all plans I had for this weekend have gotten cancelled, and I'm not going anywhere until we get plowed out on Monday.

I'm really in the mood to warm the bottom of some nice lady right about now, but that ain't happenin'.

So, I'll settle for the next best thing. It can't beat bottom-warming, but nothing warms my heart quite so much as when Jennifer Aniston goes on vacation, dons one of her (presumably) 365 bikinis, and goes swimming and tanning for all the world and the paparazzi to see. 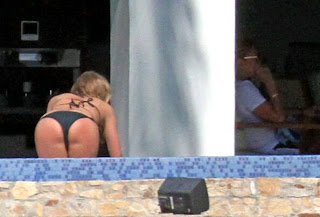 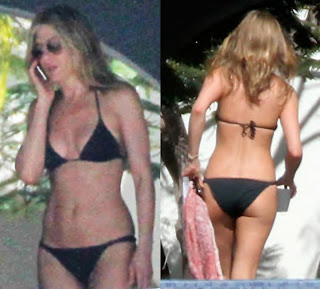 (I always wrestle with the name of the list. "Celebrities I'd like to spank" doesn't seem to take them into account, and I'm really not in favor of non-consensual spanking. At the same time, the more politically correct, "Celebrities I'd like to spank assuming, of course, that they enjoy the spanking scene as much as I do" is a bit of a mouthful. This post's title, "Spankable Celebs", is probably the best compromise.)

I think it's time for me to re-visit my list. I'm sure some names have dropped off the old list by now, giving way to newer choices. I think I'm going to stick to current celebrities. No movie stars from long ago, such as Marilyn Monroe. And for the most part, no so-called reality "stars"--no annoying Housewives, no Kardashians. There may possibly be one exception, but I'm not sure. I haven't really composed the list yet. I plan for it to be a Top Ten list, although the numbers aren't meant to indicate an order of preference. Number 2 could just as easily be Number 10, and vice versa. I hope I can come up with 10! I mean, I know I can name a ton of actresses, but would they make my "Spankable" list? I'll have to wait and see, I guess.

The lone exception to the "order of preference" rule? Jennifer Aniston really is Number ! on the list!

Seasons Greetings, Dr. Ken. Your state seems to be celebrating a White Christmas early this year. Talking of wanting to spank celebrity's. I have a couple in mind, and they are both from the political world. Namely Sarah Palin, and my favorite naughty Minnesotan Michele Bachmann. Oh how I would love to tie them both to a whipping post in this snowy weather, bare their bottoms, and cane them painfully. 25 strokes would be perpect. Would'nt you agree?

Oh, I definitely have to agree with you, Doc. Jennifer is by far one of my favorite celeb fantasies, and has been for at least a decade now. "Rachel" certainly needed to be turned over somebody's knee several times on Friends, and I get the impression Ms. Aniston wouldn't be entirely unhappy with the situation either, but maybe I'm projecting a tad. ;-) In any event, she has a gorgeous backside.

sixofthebest--no, I don't agree. This isn't a political blog. Let's stick to Hollywood actors and actresses.

Fireman Chris--if the writers of "Friends" had been so inclined, they certainly set up a number of situations that would have allowed Ross to pull her over his knee--and I think the studio audience would have cheered! Sadly, they never went in that direction. Glad you agree on Jennifer--as long as the pictures keep coming, we can look and dream, "What if....?"

Dr. Ken, since you wish to stick to spankable actresses, how about some mature beauties, such as Sophia Loren, and Helen Mirren. You must admit, their bare bottoms, would be tops, for being deliciously and delectably spankable.