How Did I Miss This?

I'm usually ("usually" being the key word) pretty good about being aware of spanking scenes in the mainstream media, movies or TV.  However, until I came across some photos while doing a web search, I was completely ignorant about a little scene in a movie from a couple of years back called "Peeples", which starred Craig Robinson and the lovely Kerry Washington. 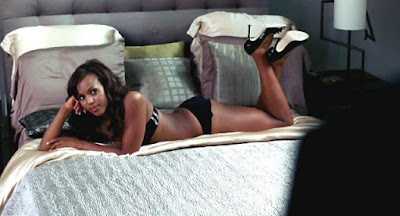 Other people blogged about it, so I don't know how I managed to miss all of the conversation, but I did.  Thankfully, the movie was on cable within the last month, and I finally got to watch it.

Rough description--Kerry plays Grace Peeples, Craig plays her boyfriend.  She goes off to visit her family, and Craig decides to take a trip to where she is and surprise her--only to discover, once he's there, that Grace has never mentioned him to her family, and they have no idea of his existence.  Grace's father in particular is quite unwelcoming, although once Grace identifies him as a "friend", he does allow Craig to stay in the guesthouse.  Hilarity ensues.

After a few mishaps that strain their relationship, Grace decides they need to talk it out, so one night she waits for him to return to the guesthouse looking like this-- 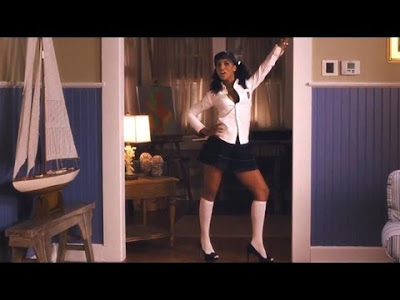 They talk and eventually make up, Grace on a couple of occasions mentioning that she's been a very naughty girl.  And now that they're back on the same page, Craig agrees that, yes, she has been a very bad girl.  And they both gleefully move on to this--

As others, I'm sure, have pointed out, there is no pretense about this--it's presented strictly as two people in love indulging in some kinky fun.  And it is depicted as fun--Grace's entire body reacts with joy at the first whack of the ruler across her bottom.

Like most movie spankings, the scene is short, and the camera doesn't dwell on it much.  We catch glimpses of it, but we certainly don't see as much as we'd want to.  Still, any depiction of spanking iin a movie is welcome--especially when it's presented as positively as this one.

Kerry is a good looking girl and it was great to see her in this scene with that outfit. Although the skirt stays over her bottom it looks like she really enjoyed herself, lying face down and kicking her bare legs for the camera.

Anonymous -- She definitely threw herself into that scene....