Normal rules do not apply in dreams. I'm tempted, in fact, to say there are no rules at all when it comes to whatever the sleeping mind conjures up. You don't even necessarily have to be yourself in your dreams. I've had dreams where I can fly, just like Superman. For that matter, I may have even dreamed that I was Superman. I know that, on a couple of occasions, I dreamed that I was the ever-lovin' blue-eyed Thing from the Fantastic Four. Most recently, I dreamed I was Wolverine of the X-Men. (I should be so lucky as to look like Hugh Jackman....) I don't seem to do a lot of thinking in my dreams, just act or react.

The strangest and most unsettling dream I ever had started in a Prison Hospital Ward. In the standard twisted logic of dreams, I was there to be checked out by the prison Doctor to make sure that I was healthy enough to be executed. The dream ended with me standing on a platform with a noose around my neck. Needless to say, I had trouble falling back to sleep after waking up from that one!

And, of course, I've had dreams about spanking.

When it comes to spanking dreams, I've had some that had a complete plot, and I've had some where I just grab the nearest lady and turn her over my knee. Within the context of the dream, it certainly seems like there's a reason for it, but I have no idea what it is. I've dreamt that I have a perfectly lovely lady in position, bottoms up and waiting, and when I've tried to swat her, my arm meets resistance, like trying to swat someone underwater. And now that I mention it, I'm pretty sure I did have a dream where I spanked a girl underwater.

I'm tempted to say that, when it comes to my dream spankees, I have no idea who they are most of the time. They're ladies I've never seen or met before, or so it would seem. But scientists and researchers (i.e., Those Who Know Such Things) assure us this isn't the case. Your mind does not make up people to inhabit your dreams. Every single person that you dream about is somebody you know, met, or have seen somewhere before. You don't necessarily know them well--maybe they were a face in a shopping mall crowd, or someone you sat next to on a bus or an airplane. Maybe they were coming out of a shop as you were going in. Total strangers that, for some reason, your mind chooses to interact with and to populate the dreamscape. As I said before, normal rules just don't apply when it comes to dreams.

At least, that's what I thought.

I recently had a dream that--for me, anyway--was somewhat different from the usual.

I was in a restaurant, seated at a table, I had apparently finished dining. I pulled out a credit card and placed it on a silver tray, waiting for the waitress to come. Suddenly, a lovely Oriental lady stepped up to the table. She was very slender, her hair done up, and she was wearing a light woolen coat that was buttoned all the way up. The coat, I remember, was sort of a rough weave, white with strands of a gold color woven through for highlights. A green dress hung out from under the hem of the coat, stopping just above her knees.

Not being any too sure how to respond to that, I replied, "Oh. Thanks" The card was a little bit gaudy in terms of color, but other than that, it seemed like just a normal card to me.

I picked the card back up, and all of sudden, I was in a debate with myself. I could maybe turn this into an opening, I told myself. At the same time, I was thinking, no, you just don't do that sort of stuff. But, being a dream, common sense lost out.

Okay, that last part is an obvious lie, because spanking her is precisely what I did want.

She walked away, and I put the card back down on the silver tray. Suddenly, the lady in the white coat came back, and with a wicked grin on her face, she reached out with her forefinger and poked the card, touching it once...twice....three times. Then she walked away again.

Even in a dream, I recognized a playful challenge. I pushed back my chair and stood up. I unbuttoned the sleeve of my shirt and started to roll it up as I turned. The lady was standing by the cashiers desk, watching me.

And that's when my mind started a fierce debate with myself.

I found myself thinking, "What are you doing?! You don't do this kind of thing! You're in public, you don't even know this lady. She could sue you or press charges. You're not really going to do anything, so stop it!"

Now, here it is, days later, and I'm still saying to myself, "She was cute, it was a dream, supposedly anything goes....and my mind starts a moral debate with me to talk me out of it??? Since when does that happen?"

It's a question I have no answer for. Maybe I should sleep on it.

And if I'm lucky....maybe the lady will come back in another dream.

And if I'm really lucky--maybe this time I'll finish what I started....without the inner monologue! 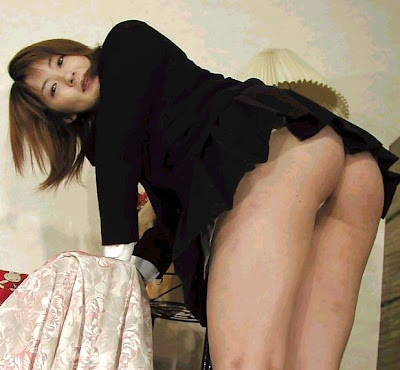 Maybe she'll return in another dream. I once had a dream about someone I really wanted to kiss, and every time we'd get close something would occur to interrupt us. We never did kiss and I woke up really frustrated! Lol.

Hi Dr Ken. I am so very happy and relieved that I ran into your site today. I now know I am not alone in my thoughts and dreams about spanking. For years now I have had dreams at night about being spanked and even felt these urges of actually wanting to be spanked. I am going to be 100% honest, I don't understand these dreams or these urges, especially since I have never been spanked before except as a child by my parents which I don't even remember much about that. I would really like to understand why I am having these thoughts and so I decided once and for all to see if I could do research online. Your page is the first one I am reading and I feel better already about my feelings on the subject knowing that I am not alone. For what I have read already, there are a good amount of people who want to be spanked and even those who want to do the spanking. I plan to read more on your page and perhaps when I feel comfortable with it all I will join. I just wanted to post and say thank you for your page, especially since I also live in Minnesota, I feel wonderful knowing that there are others in this state that may be feeling the same way I do, and actually want to experience the feeling of being spanked as an adult. I look forward to reading more of your posts. :) -Heidi

Lea--I think my girl and your guy have run off together and are living on the dark side of town on Fantasia Avenue.....

Heidi--Welcome, and thank you for the kind words about my blog. It's great to hear from another Minnesota! And believe me, you are most definitely NOT alone! If you don't mind my asking, what city do you live in?

Have fun reading and browsing through Spanking Minnesota. You always should check out some of the other blogs I have listed in the blog roll, especially those I check daily--Spanking Pixie, My Bottom Smarts, Devlin O'Neill's blog, Blossom and Thorn, etc.

And if you have any questions, please feel free to ask, wither trhough her or drop me an e-ail. Enjoy!

Thanks Dr Ken for your response. I really appreciate hearing back from you. I will email you soon to answer your question and perhaps discuss the subject more. Thanks again for the kind words. :) -Heidi