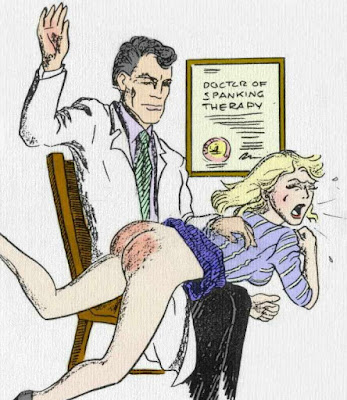 Unlike many other people, I'm not comfortable with putting my image out on the internet--so no, there aren't going to be 7 or more pictures of The Good Doctor at work.  What I am going to do, though, is tell you a little true story from early in my spanking career (and I use the term "career" loosely....)

I first started actually meeting with someone back in 1987 or '88.  I answered a personal ad, went out to the East Coast to meet her after exchanging letters and talking on the phone for about six months.  It was the first time I had found someone to spank, and thankfully, it went well.

She turned out to have a lot of spanking friends in the scene, and she was kind enough to introduce me to a number of them.  And one of them was a lovely brat named Alexia.  I got her address, she got mine, and we started to correspond and try to get to know each other.

A few months later, I was invited back out East again.  The highlight was going to be a spanking House Party--my first--but I was also going to get the chance to meet with Alexia for the first time.  We were still writing back and forth, and her last letter shortly before the party was extremely short.  She apologized for it, and promised to have a longer letter ready to give to me at the party.

The day finally arrived, I flew out East, and the next day went to the party.

It was pretty early in the evening when Alexia arrived.  I was introduced to her, and the first thing she told me was, "I have your letter, but it's only about half done.  You can have it anyway."

Now, this is how early it was in my spanking life--I didn't realize that was a cue.  I didn't see that her failing to keep the promise of the letter was her way provoking a response from me.  What I should have done, of course, was point out the she had promised to have the letter, she failed to keep that promise, and she should have wound up going with me into another room for a good session over my knee!  But I was so new to all of this, that I missed it.

Instead, I told her, "No, you keep it and finish it and then send it to me.  And," I added, trying to sound stern, "Make sure you get it done quickly!"  She promised she would.

The night went on.  I didn't do any playing, as I recall, just sort of sat back and observed and took it all in.  When the night was over, just before leaving, I relented and told Alexia, "Okay, give me the letter.  I'll take it as is, and you can write out the rest and mail it to me."

"No," she said, "Really, I'll hang on to it for now, take it home, and then I'll send you a nice, long letter."  I said okay, and that was how the evening ended.

The trip wound up and I went back home to Minnesota.

About a week later, the letter from Alexia arrived.  I opened it and unfolded it.  It was a standard piece of ruled paper, 8 1/2" by 11", and from the top of the page all the way to the bottom, this is what I saw-- 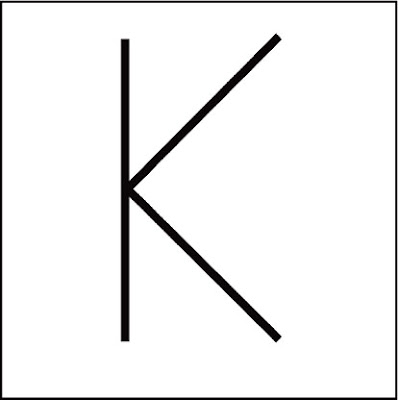 Back up on the first line, off to the right, were the lower case letters "en", so that the whole thing kind of formed "Ken", and then under that were the words, "Here's that nice long letter like I promised.  Sincerely, Alexia".

I shook my head and laughed.

About 5 more months went by, and I was again invited to visit my friend out East.  She was hosting a small party in her apartment, about 6 people, and one of them was Alexia.  I'm sure I don't have to tell you what happened shortly after she arrived--she and I went off for a nice, long "talk"-- 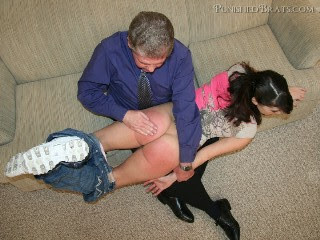 Just before the finish, I paused.

"Okay, Alexia," I said.  "Believe it or not, I am NOT going to tell you to never do that again, because I hate to take away a good trick...."

"But you're never going to do it to ME again.  Understood?"

She gave me a sincere, "Yes, sir!"  And just to be sure, I gave her another dozen or so very hard swats that had her kicking by the end.

And to her credit, she never has pulled that stunt on me again.  I'm still in contact with her to this day, and--on very rare occasions--she alludes to perhaps telling me some news in a nice, long letter.  All it takes is for me to remind her what happened the last time, though, and she quickly changes her mind.

And that's your Dr. Ken story for today's Alphabet Soup.

Cool - enjoyed read. I would have missed the clues too, sometimes I can be very dense.

Nice story and I loved the pics. Especially the Paul Davies drawing.

Leigh Smith -- I'm glad you enjoyed the story. And it's nice to know I'm not the only one that occasionally misses out on such hints.... :-)

smuccatelli -- It's the perfect profile drawing for me....

I love that you included a nice spanking picture in your narrative. I also enjoyed learning a little bit more about your spanking journeys. I myself am just a collector or observer of the spanking scene and I have to live my spanking fantasies through others and I have to admit that I would be totally clueless if I found myself at a spanking party or convention as I am rather naïve about such things (I know that they exist and attending either would be on my bucket list, but I doubt it will ever come up)and can just hope I experience it.
Thanks for a great series on your Alphabet Soup. I enjoy all your finds and I am glad you include you in your soup as well. Thanks for the great series. Have a great day.
Jim

Dr. Ken -
Thanks for sharing this honest fun story. I have been there so to speak on missing out on "obvious" clues. Really appreciate the fact that you shared this.