I was just doing some random searches on Google when I found this picture.  I know nothing about it, don't know the story behind it, don't know what's going on here.  Since it's a free country, though, I thought I'd just take a guess as to the nature of the picture......something which is also known as, "Making stuff up". 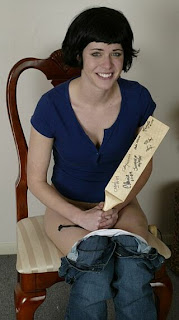 (I like the picture, btw, and the expression on her face is wonderful.)

If I had to guess (and I do), I'd say that it's this young lady's birthday and, obviously, part of the celebration involved the tradition of a birthday spanking.  I think that everyone who gave her the necessary birthday swats then signed and dated the paddle that was used as part of a unique birthday present for her.

It's from Realspanking.com. In that particular series they give girls ten swats with a school paddle. After, they get to sign the paddle.

Anonymous--thanks for filling us in. I like my story better, though.... :-)