Recently, an ad from the insurance company Geico has been playing on the radio. It uses an old nursery rhyme for it's starting point. I don't have the exact wording of the ad in front of me, so I apologize for any mistakes, but the ad goes something like this:

"Jack be nimble, Jack be quick, Jack knocked over a candlestick.... onto the shag carpet. Soon his pants ignited into flames forcing him to stop, drop and roll."

The ad then goes on to try and sell you some insurance to protect you from such a disaster.

Now, maybe it's just me. Maybe it's because I write a spanking blog. But every time I hear that ad, the same thought crosses my mind: If Jack knocked over a lit candlestick onto the shag carpeting, I bet I know the real reason his pants ignited: 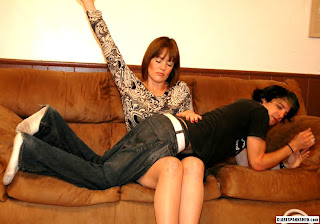