It was September 30, 1960 that we got to meet The Flintstones for the very first time. That's right, this Stone-Age version of The Honeymooners, with Fred Flintstone substituted for Jackie Gleason and Barney Rubble filling the Art Carney role, celebrates it's 50th anniversary!

For an animated show that relied heavily on cartoony slapstick, I nonetheless can only recall one instance where spanking played a part in an episode. This occurred when the wives, Wilma and Betty, disguised themselves as men (i.e., put on big fake moustaches) in order to sneak into the Water Buffalo Lodge where Fred and Barney were members to see just what they did at their meetings. Unfortunately for the ladies, they get caught up in an initiation ceremony, and both ladies wind up getting swats from a paddle as part of their induction. 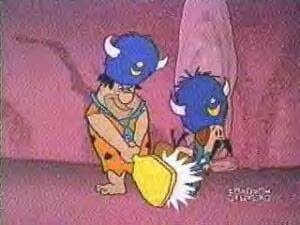 Thankfully, what a TV series neglects, more often than not fan fiction and fan art jump in to fill the void. Here are some renditions of the spankings that never took place, but should have--and Happy 50th Anniversary to The Flintstones! 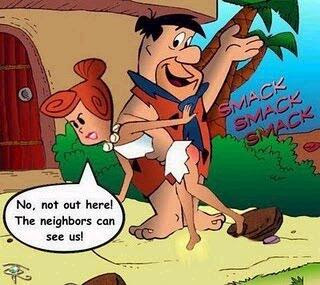 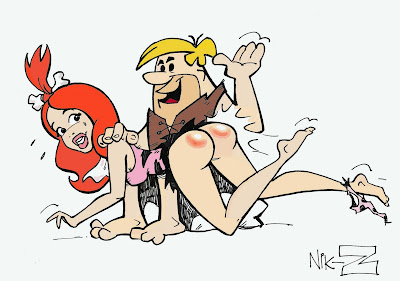 I'm too young to remember the first episode but I did "grow up" on the Flintstones. That my children grew up on their vitamins is a testament to their longevity.

I'm surprised there wasn't more spanking - since their from the "old days".

B'Man--I know what you mean. You'd think Stone Age cavemen would be fairly quick to get "to the bottom of things". Sadly, that just wasn't the case.