Part of the fun of writing a blog such as this lies in coming up with things to write about. I'm not in a relationship, and there's nobody I spank on a regular (daily, weekly, monthly) basis, so obviously this blog cannot be a diary of my spanking adventures. If it was, I'd only post twice a year, or maybe every three months when a Chicago Crimson Moon party rolled around.

This means I have to write about other things. I'll write about past experiences, perhaps, or some points of spanking protocol, or make up song lyrics, or make comments about pictures I've found on the web, or occasionally write a caption for a picture I've found. Sometimes it takes a while. I don't have any set schedule that I adhere to when it comes to posting. My "posting schedule" consists of the words, "When I feel like it." And then, when the mood hits, I put a post together and throw it out there for all you wonderful readers. (And with a schedule like that, believe me, I really appreciate the fact that all of you keep coming back and checking the blog for updates.)

Posting is just one part of the fun--the other part is reading the comments that a post may generate and responding to them. I've had posts that have gotten no comments whatsoever. Others have replies that number in the double digits. Adding a comment isn't required, of course, but it can add to your fun and your enjoyment of a blog such as this.

Take, for example, Devlin O'Neill's Weblog. Dev, Gwen, and Michael turn out a prolific number of posts, and they have a regular roundtable of readers (myself included) who enjoy talking about them--although sometimes those discussions can veer off into off-topic territory, which might be why it's not unusual to see a post on Devlin's blog with 20, 50, or 75 comments.

Michael is one of those who keeps the reply ball rolling. Sometimes he "highjacks" the blog from Devlin and puts up his own post--other times he confines himself to reading and adding to the commentary to further the conversation, or just to try and keep certain young ladies who frequent the comments ssection from running amok.

Michael is also a valued reader of this blog, and his comments here are always welcome. So I'm posting the following two pictures in his honor. On Dev's blog back on July 11, he wrote a very nice article on actress Scarlett Johansson. (You can go to Devlin O'Neill's Weblog to check it out....use the "search" option at the top of the page and enter--what else?--"Scarlett Johansson".) 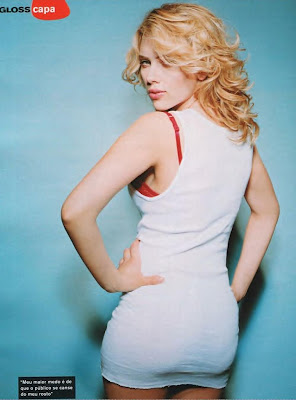 And the last picture is from a Vanity Fair cover that featured many of the upcoming new--and nude--young actresses to watch out for: 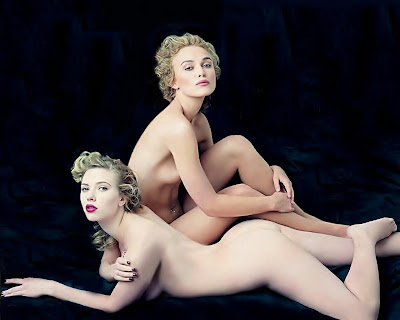 I seem to recall Scarlett Johansson commenting on this photo later, making some reference to her "doughy white butt" (I haven't been able to find the exact quote, so the wording here is approximate). I think Michael would agree that she is worrying needlessly--I think she looks just fine, and not doughy at all.
And as for it's whiteness--I think Michael might have an idea or two on how to add some color to her cheeks!
Posted by Dr. Ken at 2:54 AM

beautiful pictures Dr.Ken - i think michael will appreciate them!!

i think her bottom is quite lovely!

OH, MAN! Being featured in a post on your blog, thank you so much, Dr. Ken. Yes, Scarlett is a cutie and one of my favorites and I would like to knead her doughy white butt (though I don't think it's doughy either) and really put the scarlet in Scarlett. Thanks again for the kind words and I know Dev and Gwen will be thrilled, and you are a big part of our blog family, Dr. Ken. You're usually the straw that stirs the drink, and in your case the drink is 'A Good Spanking.'

The link I posted before might not be working right. Let me try it again:

Hey Doc. cool post and honors a pretty special guy in most of our lives (even if he is a bit tough on the punishment side of things). LOL

I agree though it is a good thing he is on Dev's blog keeping Season, Gwen, Kristina, Lily, Pest, Belle,Gertie, and a host of other girls in line.

Me? I have been reformed.

Imp--I agree. And hey, she's even almost in proper position for a spanking--beautiful bottoms up!

Season--I knew there had to be a reason, Season!

Michael--You're welcome, my friend! Good to have you back!

CJ--reformed? I'll believe it when I see it!

Season, having a bit of a technical glitch or is it operator error? ;)

cj, reformed! LOL Please don't make me laugh as I am not fully recovered and belly laughs tire me out. Your name is at the top of the list, young lady. And as for being too tough on the punishment side I only give you and the other girls what you need and deserve, and also have earned with your bratitude.

Lovely post for Michael, Dr. Ken. Thanks for that.

Gwen--you're welcome. And be sure to check out my Halloween post.
:-)