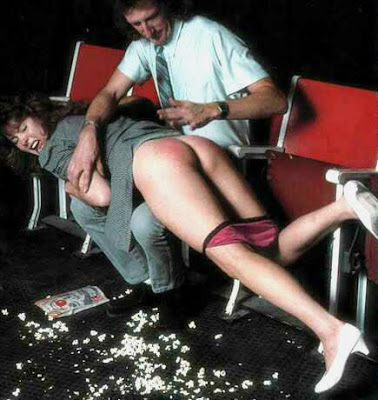 In an April 5th post called "Direct Hit" on The Pink Report, this photo was used to illustrate the entry.
This has always been one of my favorite photos. Not because of the models. The guy is kind of--well--dorky-looking. No, I think I enjoyed it because of the setting. A public spanking in a movie theater? Probably nothing I would ever dare do in reality, but the thought of it certainly stirs the imagination.
When I saw this photo, my memory stirred a little bit, and I seemed to recall that there was at least one other photo of this scene--one I was sure I had in my archives somewhere. It also seemed to me that the two pictures were somewhat similar--the mysterious "other" photo didn't differ too much from the first one. I started combing through my files trying to run it down, and I eventually succeeded.
It turns out I was right on both counts. There was a second photo, and it wasn't too different from the first. The shot was a little closer to the subjects, in a little tighter. You couldn't see the floor at all. The man's hands were placed differently, and the woman's body was in a slightly different position. Here's the other photo and you can see for yourself: 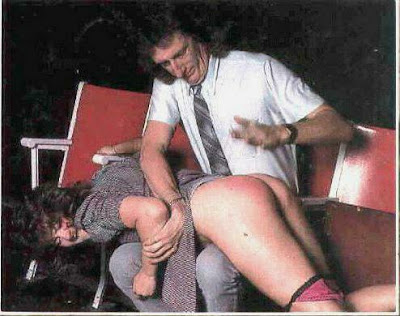 I did make one change to the file. The original file of the second photo had, for some reason, been flipped around so that the spankee's head was to the right side of the photo, rather than facing to the left as in the first photo of this scene. I've always hated it when that happens in a photo set. Are we supposed to believe the spanker stopped and said, "Okay, now get up and go across my lap the other way so I can spank you with my other hand"? As a spanker with years of experience, I can assure you that doesn't happen. So I took the second photo and created a "mirror image" of it for the sake of consistency. The lady now faces the same way in both shots.
It's a minor detail, and maybe I'm the only one it bothered--but what the heck, it's my blog.
:-)

One final note: Speaking of blogs, I have added a new blog to the blogroll at the right. Raven Red is now on the list. Be sure to take a look at this fine blog, and remember to tell them, "Dr. Ken sent me."

And here I was trying to quietly sneek in and out enjoying your blog! (GRIN)

Thank you for the mention and happy that you do enjoy!

Seriously, feel free to sneak in any time. And I'm happy to have you on my blog roll.

I've added that second photo to my collection now, Dr. Ken! Thanks for finding it. I'm a big fan of the theatre spank but a little hesitant to purchase all of the seats to do it. (Guess I'm not that committed!)

BTW: Raven is a fine addition to your blog roll. :)

Pink -- Go to a matinee showing of a movie that's been out for a few weeks. The theater will be nearly empty, and you should have no prolem finding a whole row for yourself and the lucky spanker