Catching Up On TV, part 2

The amazing thing about my last post isn't the spanking reference from the show How I Met Your Mother. The amazing thing is that there was also a little something for the spanking enthusiast on the show I recorded prior to it, meaning that I had something to appeal to my inner spanko two shows in a row. The show I had recorded first was an episode of Desperate Housewives with a little spanko interaction between Carlos and Gabrielle, played by the lovely Eva Longoria. 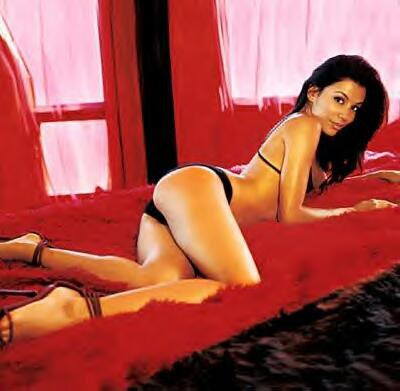 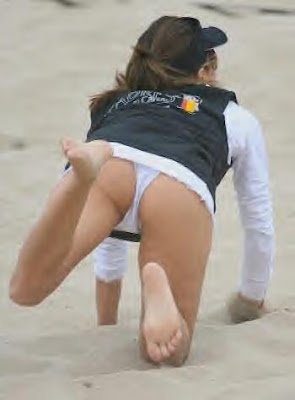 (Eva Longoria, at ease and at beach volleyball)

In the episode, Carlos discovers that Gabrielle has been blowing off her appointments with her therapist and has instead been spending the time at the spa. He leaves the house like a man on a mission, and we, the viewers, have a pretty good idea where he's going.

The next scene shows Gabrielle on a massage table, wrapped in a towel. The door opens and someone comes in. Gabby assumes it's time for her massage and, without looking up, instructs the person to start on her shoulders, as she's feeling a little tense. We see a pair of hands grip her shoulders and really dig in. Gabby complains and asks the person to lighten up. The hands just seem to grip her shoulders harder. She finally rises up slightly, waving the hands away, and tells him to forget the shoulders, let's start somewhere else.

At which point we hear Carlos say, "Okay. How about the glutes?", and he gives her a whack on the backside.

(Anybody here really surprised to find out the hands belonged to Carlos? I didn't think so.....)

Eva Longoria oversells the swat, in my opinion. She bucks on the table, hair flying. As a longtime spanker, I can tell you the swat she got was nowhere near hard enought for that reaction. Still, she is an actress, after all, and she acted the hell out of that one smack.

Carlos proceeds to scold her and lets her know in no uncertain terms that she'll be keeping her therapist appointments. Gabby reluctantly agrees, but isn't ready to leave right that moment, as she's still too tense. She lies face down on the table again and tells Carlos, "A hundred bucks if you finish what you started."

At which point Carlos gives her bottom another spank and tells her, "That one's for free."

Her reaction to this swat, by the way, is perfect. Her head comes up, mouth open, a small intake of breath. It's the perfect response to Carlos's action.

I must say, ever since Desperate Housewives started, I've been waiting and hoping that Carlos would go all Ricky Ricardo to Gabrielle's Lucy. We still haven't had a full-out spanking--and this might be as close as we get--but it was enjoyable for what it was.

So there was that on Sunday night, and then the Alyson Hannigan comment from How I Met Your Mother on Monday night. I can't wait to see what I recorded Tuesday! Maybe cheerleaders Brittany and Santana get sent to the Principal's office for a paddling on a very special episode of Glee?

Cool! You really never know when a bottom is going to find its intended hand. Then it's magic.

Hermione--It's true, whether it's in real life or in a Hollywood created world

Any idea what the episode's name was?

Chross--I don't know the episode name. Since so many of the shows I recorded following it mention Valentine's day, I'm guessing that it's the episode that aired on Feb. 14th--or a new episdoe that aired around that time (Feb. 7th? Feb. 21st?)

Thanks Ken - here is the clip:

Dr. Ken
Minneapolis, Minnesota, United States
I'm Dr. Ken, 70, and single. I'm a Spanker, I live in Minnesota--hence the blog name! Spanking Minnesota is updated daily. While the main thrust of this blog is adult consensual spanking, it's not the ONLY thing you'll find here. There will be posts about spanking, of course, but I reserve the right to post about anything I want. So you'll find song parodies (usually spanking related), photos with captions that I make up (usually spanking related) and photos of ladies with very spankable bottoms (obviously spanking related) and occasionally posts about non-spanking related topics. I think spanking is fun, whether it's "mock punishment" (or "funishment"), something a little more disciplinary, or a spanking just for the heck of it, and I want this blog to reflect that.. I'm a member of the Minnesota Spanking Group on FetLife, , HankySpankyMN (check out the Yahoo group), and a long-time member of Chicago Crimson Moon. I've been known to attend other parties around the nation, such as the Texas All-State Spanking party. If you see me at one of these events, feel free to come up and say, "Hi", and if you'd like to play--just ask me! . So, do YOU need a spanking, young lady?