Mary Worth was a daily comic strip that ran for years, starting way back in 1939. For all I know, It might still be running today.

The strip was created by writer Allen Saunders and artist Dale Conner, although it reached its heyday when Ken Ernst took over the drawing duties.

Mary Worth might best be described as a soap opera. The main character, of course, was Mary, a former school teacher and the widow of a Wall Street tycoon. Mary originally lived in New York, but then later on moved into a condominium complex in California.

Interestingly enough, the stories--at least originally--never centered around Mary, but were developed around her fellow residents at the complex and other people she met. The stories would evolve and develop with Mary mostly an observer, making brief appearances at best, and then at some point she would step in to give a good dose of matronly advice to one or more of the participants.

Each story work was independent of the next. There was little attempt at continuity in that regard. Once a story was over, it was over, and it was on to the next. In later years, the stories began to center a little more around Mary and her friends.

And for what it's worth--Mary supposedly made a mean tuna casserole.

Being the old-fashioned sort, I'm sure Mary was no stranger to spanking, and had probably had more than her share during her life. So, in the example below, it should come as no surprise that Mary reacts very matter-of-factly to the scene she encounters. Wise lady that she is, she knows that sometimes the best way to deal with a naughty young lady--or a lady of any age, for that matter--is to turn her bottoms up and get to the seat of the problem.

The following are probably actually two days worth of strips, and shows what happens when a foolish young girl interferes in someone's love life. That's Mary Worth holding the dry cleaning in the final panel. Click on it to enlarge for a better view. 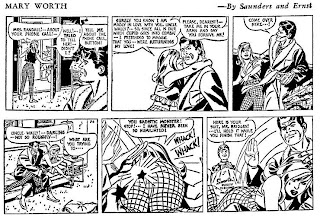 Hi, Dr. Ken! It's surprising that I hadn't found your blog before, because we have lots in common!

Anyway, thanks for this post of the Mary Worth strip. I always wondered if Folger's Mrs. Olsen was Mary's TV cousin.

Dave--I tend to fly a bit udner the radar, I think, excpet for those occasions when Chross picks one of my efforts as a "Spanking Of The Week". But I'm happy to see you drop by.

And I hadn't thought of it before, but now that you mention it--yes, Mrs. Olsen certainly seems to be cut from the same cloth, doesn't she? A little tuna casserole, a little Folger's in your cup....

Good description of Mary Worth, Ken, for those readers who may not have seen it before. If anyone is interested in the post-spanking panels from this episode, I have posted them here.

Web-Ed--fantastic! I'll have to get over to the Chicago Spanking Review and look at them myself. It's been years since I've seen them.
I remember seeing this strip with the spanking in it when I was a kid--or, at least, much, much younger. I remember wanting to cut it out and save it, but before I could, my mother used the section to wrap around garbage. I was thrilled to find a scan of it in one the spanking newsgroups.