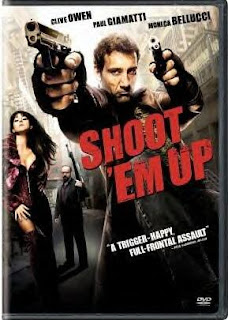 The movie Shoot 'Em Up is now out on DVD. As some of you may know, there is a small spanking scene in this film.

The scene takes place in a museum. Our Hero (Clive) is trying to create a diversion, and he spots a mother (Laura DeCarteret, pictured above) threatening her child with a spanking if he doesn't behave. She then smacks his backside a few times.

Taking advantage of the opportunity, he walks over to her and tells her not to do that. She basically tells him to mind his own business. He then hauls her to her feet. Holding her arm, Clive then begins to smack her bottom, asking her how does she like it, doesn't feel so good, now does it, etc. The woman's son is shown pointing at his mother and laughing while this is going on. Diversion complete, Clive lets go of her and leaves her standing there.

In the film commentary, the writer/director Michael Davis mentions that the woman playing the mother had been excitedly telling her friends for weeks before the scene was shot that she was going to be spanked by Clive Owen, and that she was very excited about the scene. They filmed the scene and, the director added, "She loved it!" No mention on whether she deliberately blew the scene so that they would have to film it over and over again.

The spanking is filmed from the front, so you see the woman's reaction to it, but really don't see much of the actual spanking. It's a nice humorous bit in a film that definitely needed one, but all in all, not that great a scene.

If you saw the film, tell me what you thought of it.